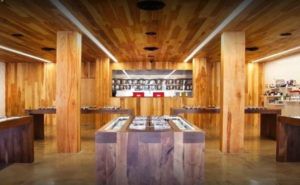 MedMen’s remaining medical marijuana dispensary in Arizona is in Scottsdale near the Talking Stick Resort.

Bad news continues to pile up for California-based MedMen Enterprises.

After the multistate operator’s founders stepped down from leadership roles in January, their replacements have continued to struggle to right the ship, and just last month, MedMen lost a medical marijuana business license in Virginia.

Recently, MedMen has been further hit with:

Combined, the three new hurdles could easily cost the company millions, not to mention the costs associated with keeping two formerly operational stores in Arizona shuttered while the litigation plays out.

A MedMen spokesman declined to comment for this story. But in an email to Marijuana Business Daily, he cited a recent company news release touting plans for a “financial restructuring and turnaround plan,” which includes deferring $32 million in financial commitments for a year.

“Implementing our turnaround plan is the best way to ensure that MedMen continues on its path to building the leading cannabis retailer in the U.S.,” MedMen interim CEO Tom Lynch said in the release.

But Mike Regan, an equity analyst and managing member of Denver-based MJResearchCo, pointed out the potential hurdles facing MedMen’s plans for recovery.

“Losing the Pasadena license would be a negative compared to MedMen’s restructuring plan, since Pasadena is a planned opening in the next 12 months,” he noted. “A license that cannot be transferred even internally isn’t worth much to an investor or creditor.

“MedMen planned to sell the Arizona dispensaries as part of the restructuring plan, so the question is if the lawsuit has delayed this process. The receipt of $10 million on July 2 for a future sale of a single unspecified non-California license may be related to this issue.”

The Arizona case began in May when the original owners of two licensed Arizona MMJ dispensaries – CSI in Scottsdale and Kannaboost in Tempe – filed suit against MedMen for not paying $12 million still owed from an acquisition deal struck in February 2019, according to court filings.

MedMen originally agreed to pay $15 million to purchase both licenses, with a $3 million down payment made last August, according to the lawsuit.

In its own court filings, MedMen noted that it’s paid $33 million for the two shops.

The remaining $12 million, plus interest, was due in February.

But the company was not able to make that payment, and the deadline was extended multiple times, until the original license owners filed suit against MedMen, according to court records.

MedMen has countered in court filings that it has until the end of the year to pay the debt under an agreement it says was solidified between the parties.

The case is ongoing, but the two stores appear to have been at least temporarily shuttered.

According to MedMen’s website, one Arizona location is still operational, in Scottsdale.

In Pasadena, MedMen might lose a retail license it won last year because of executive turnover at the company, according to local news outlet Pasadena Now.

The Pasadena city manager’s office notified MedMen on July 1 that its application might no longer be valid because of the departure of at least seven company officials.

Pasadena Now noted the officials – which it did not identify – were “listed in MedMen’s initial January 2019 application as owners or key staff.”

According to Pasadena officials, that amounts to a “change in control” of the company and, therefore, the license, which is prohibited under the city’s marijuana licensing rules.

The city gave MedMen 10 days to prove “it remains under the control of the people listed on its application,” Pasadena Now reported.

Given the high turnover at MedMen – including the departures of former CEO Adam Bierman and ex-President Andrew Modlin – that appears unlikely.

To add to MedMen’s potential financial burdens, former CFO Parker is asking a judge to order the company to pay $600,000 in legal fees he claims he’s owed under his original employment contract. MedMen has hotly disputed that claim.

According to Law360, MedMen has responded that Parker himself violated the terms of his contract by departing without a required 90-day notice, which nullifies the company’s obligation to pay his legal bills.

MedMen trades on the Canadian Securities Exchange under the ticker symbol MMEN and on the U.S. over-the-counter markets as MMNFF.

John Schroyer can be reached at [email protected]